A part of the Winns Road Historic Precinct, this property has Local Heritage Listing and was built in about 1890 for Oliver Winn and his wife, Sarah (née Wait).

While the exact construction date is not conclusively known, examination of the workmanship on the stonework at the front of the building and family comments, indicate that the builder was John Weymouth II. It is known that the stone came from John Weymouth’s quarry at the top of Ackland Hill Road.

The building was a home incorporating a butcher’s shop on the south east corner and a cellar below. Another paddock was purchased south of the house block. Stables were added in 1903 and a slaughter house in 1908. In 1911 a shed was added for a sausage making machine.

Both the slaughter house and stables were demolished (in 1958 and 2010 respectively) but as at 2018, the sausage shed still remains.

Oliver died in 1913, aged 59, as the result of an accident when his horse shied. Sarah and their daughter, Beatrice ‘Daise’, continued running the business with the help of Sarah’s nephew, William ‘Arch’ Jones.

Arch purchased the business (but not the land) in 1916 and when he moved his business to Blackwood in 1920, the Valley butcher shop was run by his brother Perce Jones and continued operating until 1932.

The house was then rented to various families until Daise sold it in December 1943 (Sarah had died in 1941). It was purchased by May, a daughter of Arch Jones, and her husband, Laurie Watchman. The land continued to be used productively but the shop was closed. Laurie died in 1996, aged 81. May moved into a nursing home in 2001. The Watchman family owned the house from 1943 until 2002.

Not surprisingly, their home became known locally as the Watchman House. It was bought in 2002 by the City of Onkaparinga and in 2015 the exterior of the house was restored and the interior renovated. It is now leased by the National Trust SA for use as a history records centre and community facility.

Use of the house today

A primary use of the house by the National Trust is the collection, preservation and display of information about the history of Coromandel Valley and surrounding districts. The heritage value of community itself is not to be lost.

An important function of the house is to foster community spirit by providing a meeting place for people to come together. The Watchman House:

Open on Saturdays from 9am till Noon, Watchman's has become a popular destination for people to drop in for morning tea for discussions of local or family history, and casual conversation.

Being on the Sturt River Linear Park means that the surrounds provide a handy place for walkers to rest or enjoy lunch. 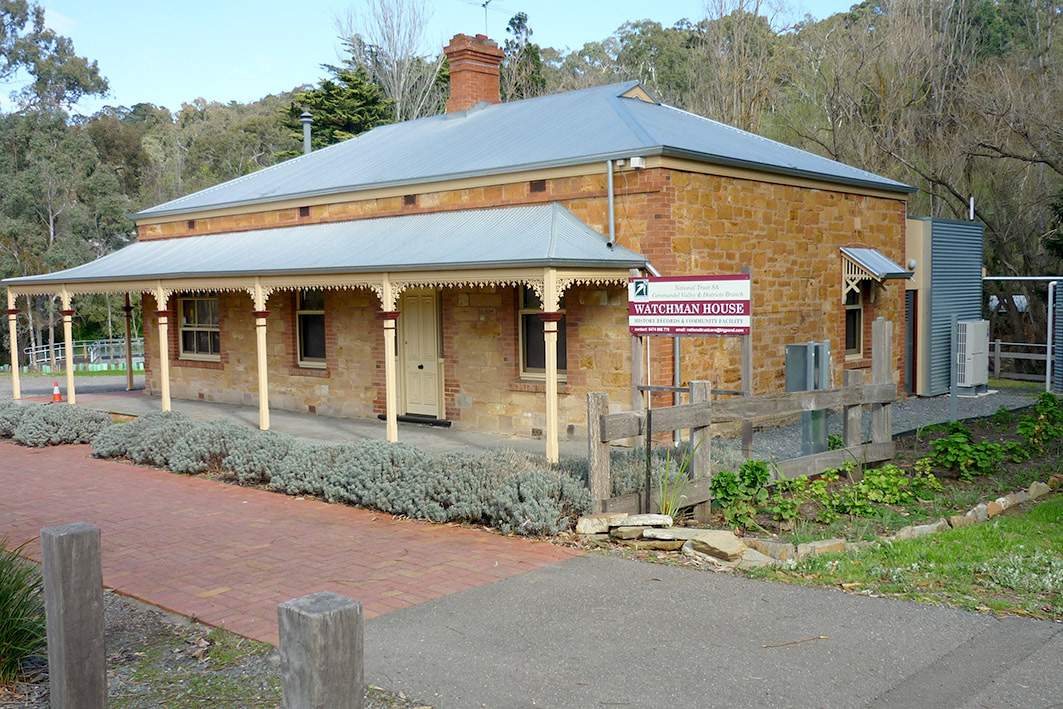 Restored in 2016-17 by the City of Onkaparinga, the Watchman House is now leased to Coromandel Valley & Districts Branch, National Trust SA for use as a History Research and Community Facility.