Located on Winns Road, Coromandel Valley adjacent to the River Sturt and a ford (crossing point)

Built in 1878 by Daniel Hewett, the Bakery was initially run by Henry Langsford, son-in-law of Enoch Shepley.

Shepley had built his two-storey house and general store across the road around 1860. It is currently a private residence.

Originally, the Bakehouse had two ovens with a capacity to bake 220 loaves in each oven.

During the 1880s Walter Winn operated both properties and businesses. Later, when his brother Oliver established a butcher’s business on the other side of the ford it was then indeed Winns Road!

In those early days, Winns Road was the main road, so having a bakery, general store (including a Post Office) and a butcher shop with a slaughter yard over the ford, made this area a focal point of Coromandel Valley.

When the Bakehouse first opened and for a few years on, flour was brought from Port Adelaide by horse and wagon. Later, with the opening of the Hills railway, flour was railed to Blackwood Station with a horse and dray (cart) was used to complete the journey to the Bakehouse. William Conlon was one of the early carters.

Some of the early brands of flour used were Charlick, Harrison, Adelaide Milling Co, and Thomas. Each bag of flour weighed 100lb imperial weight (45+kg), which made 102 standard loaves.

The ovens were heated by wood-fire furnaces. Metre long wattle or stringy bark was used for fuel because it burned and flared well. The damper at the side of the oven was pulled out to make the draught carry flare all over the oven.

About an hour after lighting the furnaces the Baker would test the heat of the oven by throwing a little flour onto the oven brick floor. If it turned brown the oven was hot enough for baking.

The Baker then shut down the damper, closed the furnace door, and let the oven lay to consolidate the heat.

Before loaves were put in to bake the ovens were cleaned with a sciffle (a long pole with a bag tied around one end that was dipped into a bucket of water). This was pushed all over the oven floors to pick up any ash or pieces left by the fire.

The Bakehouse served the local community from 1878 to 1940. The bakers were Messrs:

The Coromandel Valley & Districts Branch of the National Trust SA was formed in 1970 and its members undertook to restore the then dilapidated Bakehouse – it had closed 30 years previously.

The purpose of the restoration was not only to preserve the heritage of the property, but also to use it as a museum to display memorabilia of the pioneer families and early settlers of Coromandel Valley and its environs.

The museum was opened in 1971 and since that time has been a source of interest and learning for many hundreds of children and adults.

The property and land are currently owned by the City of Mitcham.

The Winns Bakehouse Museum is open 1–4pm on the 3rd Sunday of each month, from February to November.

Community and school groups enjoy visiting the Bakehouse and hearing stories of our heritage at other arranged times. The displays inside and the surrounds prompt many questions and stimulate interest in how life was in South Australia's early days. 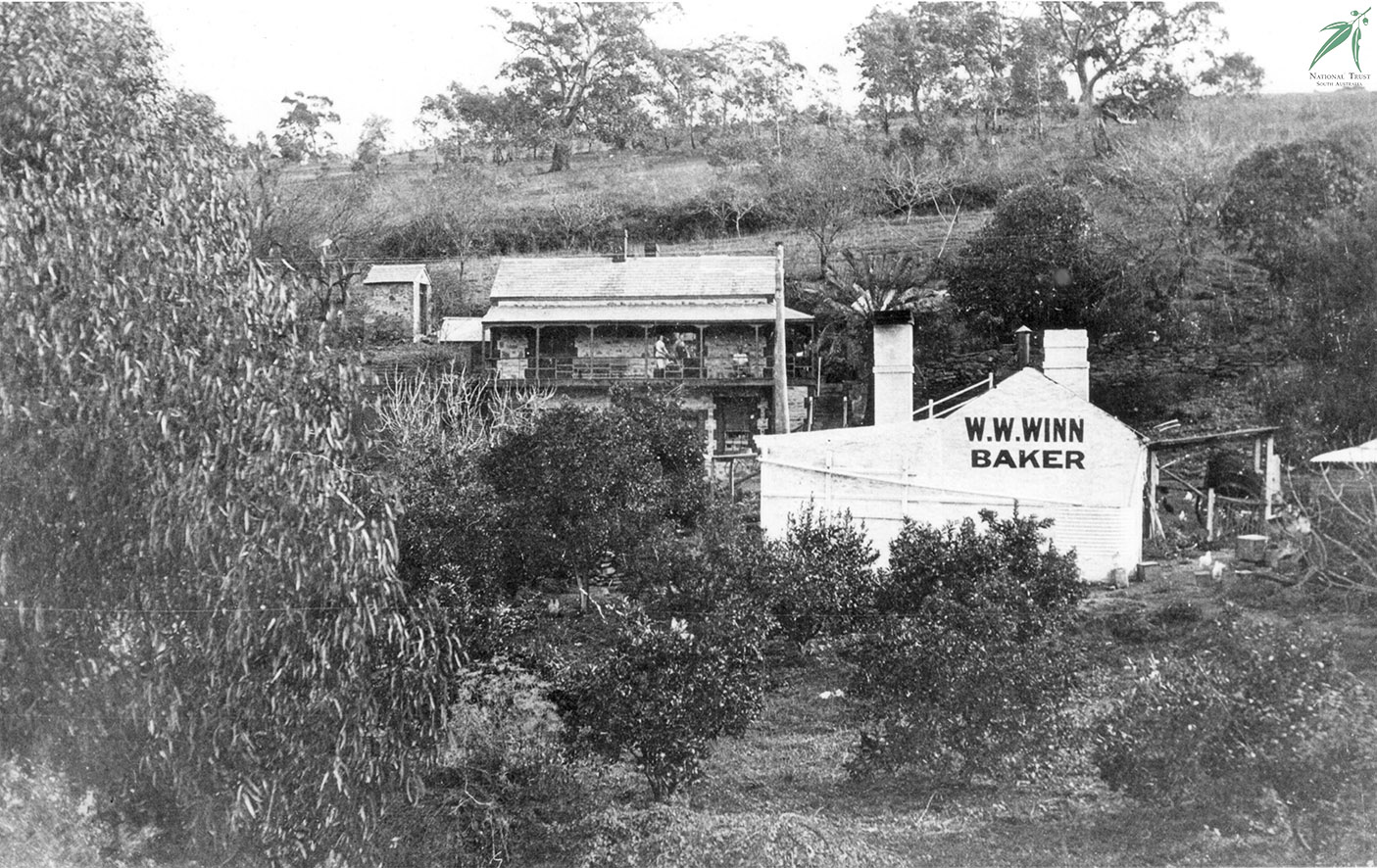 Winns Bakehouse (foreground). Shepley's home/store is in the background.