In July 1875, a meeting of residents was held in the then schoolroom alongside the Coromandel Valley Cemetery, and it was resolved to establish an Institute in Coromandel Valley and to seek affiliation with the South Australian Institute. It would appear that the Young Men’s Improvement Society provided the nucleus for the new organization. Twenty names were enrolled as members, and the Trustees of the school donated 50 small volumes to form the nucleus of a library.

At the end of the cricket season in July 1876, members of the Institute put on some Saturday night entertainment for the local cricket club. The event was held in the schoolroom alongside the cemetery. In his Chairman’s address, Mr Kyd (Headmaster) spoke of the advantages of having an Institute building and that a subscription list was afloat to try to raise funds for its construction.

The Institute again put on entertainment for the cricket club at the end of the cricket season in mid 1877. This event was held in the large rooms of Murray’s Biscuit Factory. In November 1877 the Rechabites held a function in the biscuit factory, and during the evening Mr Kyd announced that Jean Eliza Murray, (daughter of Alexander Murray Snr.) had collected subscriptions for the purchase of a piano, which had been given to the Institute. When responding to Mr Kyd, Mr Murray expressed his pleasure to hand over the instrument, and said he would give 50 pounds towards the erection of an institute building.

In August 1878 a meeting was held in the old schoolroom to further the erection of an Institute building. The meeting heard that Mrs Elizabeth Gill (wife of the late Samuel Gill, and also the sister of Alexander Murray Snr.) had offered a parcel of land upon which the building could be erected. It was agreed to accept Mrs. Gill’s offer, and the building was erected on the site it occupies today.

The story of the planning, specifications and progression of this project is interesting to read in the local National Trust records.

On Monday 3rd January 1881, on the New Year’s Holiday, Miss Jean Eliza Murray laid the foundation stone for the new Institute building. Stone for the back and sides of the building came from Murray’s quarry across and up the Sturt River. The front sandstone was taken from John Weymouth’s quarry at the top of Ackland Hill Road and was laid and chisel pecked to give a decorative finish to the front.

Delays occurred in the construction programme, and the community had to wait until 26th October 1881 for the Institute Hall to be officially opened by Mr James Clark JP.

Over the years, the Institute Committee and the Hall have contributed greatly to the Coromandel Valley community. Golden Jubilee and Centenary celebrations have been held for the building. The Committee, in addition to running the Institute, devoted time to community projects such as the restoration of the Valley tennis courts after the Second World War.

Mention the Institute to older community members and treasured memories are kindled. Coromandel Valley school break-ups, attending welcome home celebrations for soldiers after war, playing competitive table tennis, and using the library were mentioned frequently. Also recalled was Bill Moulden conveying people on the back of his truck from the Blackwood Post Office (and later return) to attend dances.

One person who is remembered by many is Hilda Scroop, who for many years played the piano at dances. Her beat was legendary and she was known affectionately as "Basher Scroop" ... and those dance suppers were recalled independently by two respondents as "bloody good/magnificent suppers". 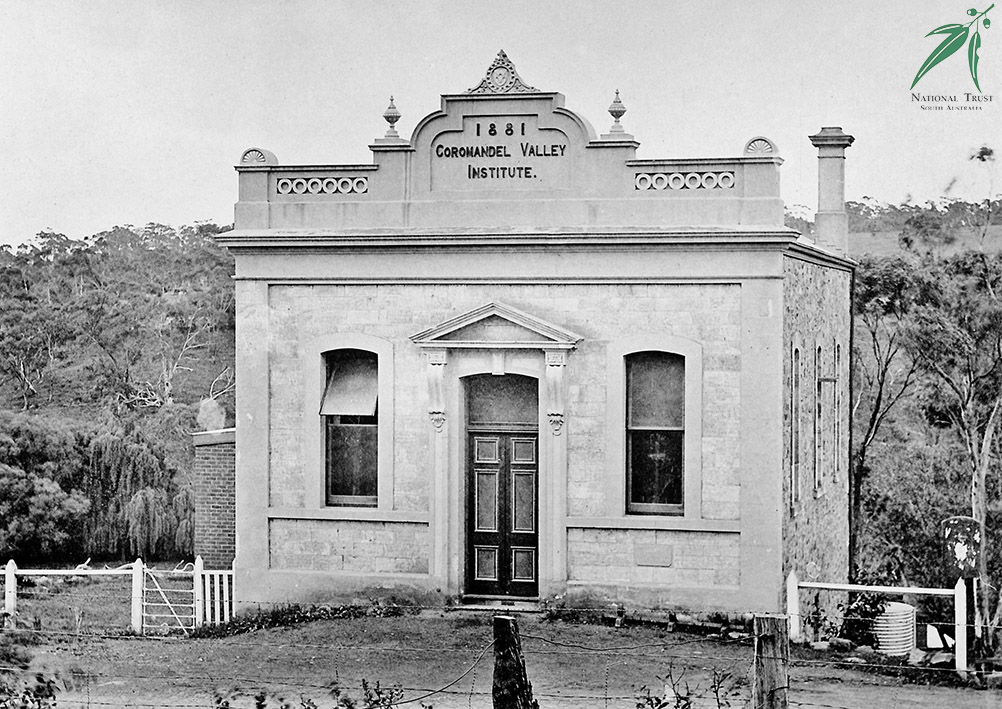 Since the mid-1990s this imposing building has been home to a thriving glass art workshop and retail outlet.